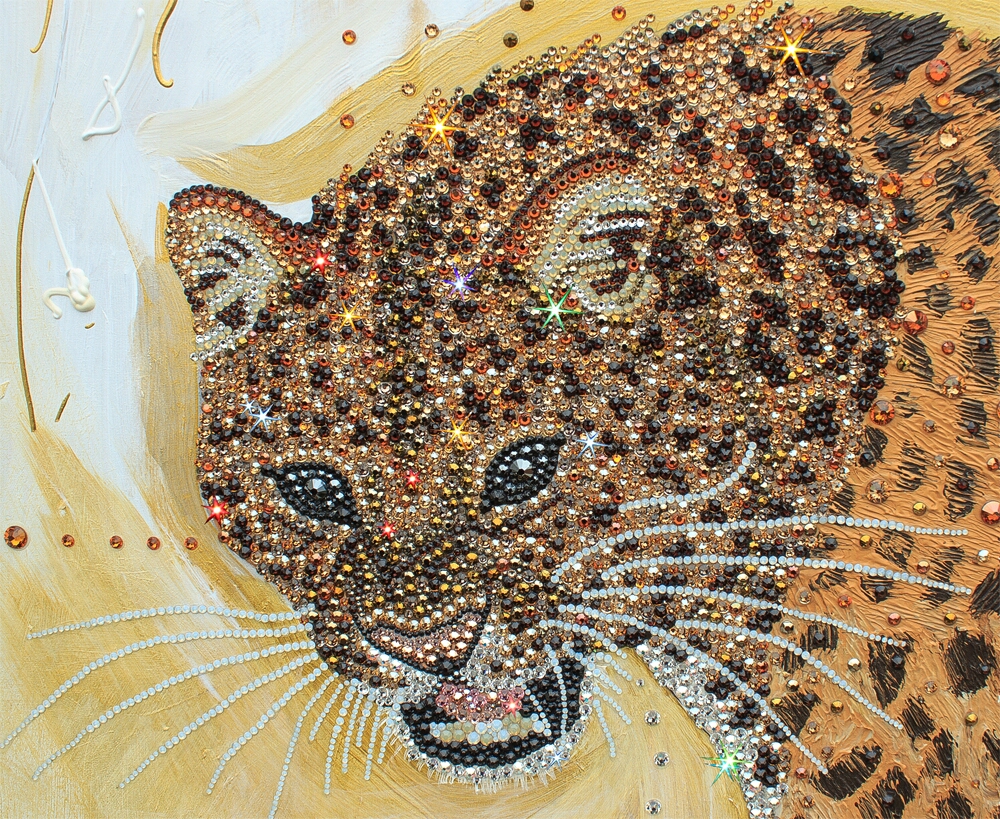 World Animal Day is a perfect opportunity to celebrate animal life by viewing a new art exhibition created by Claire Milner. At first glance, these sparkling paintings are gorgeous images of endangered animals. Upon closer inspection, however, each work shows a much darker subtext. The hauntingly expressed consequences of poaching, climate change and habitat loss powerfully focus on the plight of some of the world’s most vulnerable species.

Contemporary artist Claire Milner gained international fame for her crystal mosaic portrait of Marilyn Monroe. Made with 65,000 Swarovski crystals, the Monroe portrait was purchased for $160,000 by musical megastar Rihanna. Claire has just completed her latest art collection of seven crystal-encrusted paintings of endangered animals, available and on view at the Rebecca Hossack Gallery in London.

The Intolerable Rate Of Extinction At The Hand Of Man

Each of the seven animals in the art exhibition is a flagship species. Claire’s goal is to raise awareness of the intolerable rate at which animal species are becoming extinct at the hands of man. Says Claire, “This is a subject that is very close to my heart. The collection has involved hundreds of hours of emotionally draining research, as well as the individual application of tens of thousands of crystals, so to see the paintings finally finished and getting such a positive response is fabulous.” 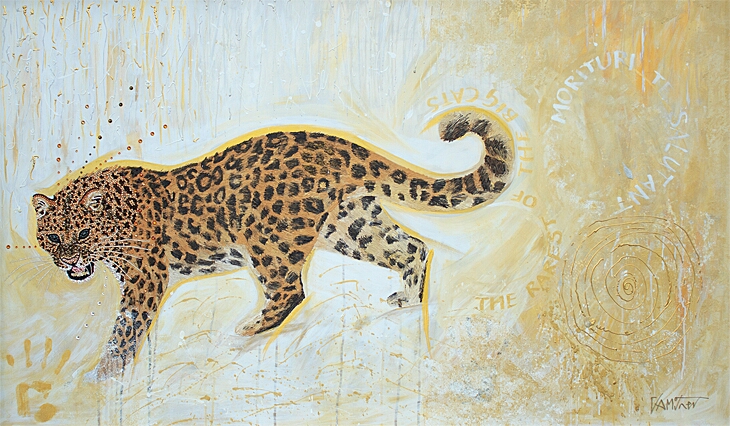 The above depiction of an Amur Leopard is titled, “Soulless.” Containing 5,000 crystals, its unframed size is 5ft x 3ft. “Soulless” is influenced by Dante’s Divine Comedy where the leopard appears as an allegory for self-indulgence. This leopard symbolises the greed of man in the persecution of these creatures. The leopard is depicted with hollowed out eyes representative of starvation, especially of the soul.

“Those Who Are About To Die Salute You”

The spiral in the lower right hand corner of “Soulless” represents the nine circles of hell. The text in both English and Latin is written in the shape of the number 30 which signifies the approximate numbers of Amur Leopards left in the wild. The latin phrase, “Morituri te salutant,” is from the famous quote, “Those who are about to die salute you.”

This incredible collection of art is all about contrasts, both literal and symbolic. Each singular animal represents the last of the species and is composed of thousands of Swarovski crystals. The crystal mosaic applied with sensitive technical precision to the face contrasts with the ominous painted background.

Warning! We Must Act Now To Save These Creatures

Each painting includes a handprint, which simultaneously symbolises the birth of art and the destruction of the planet. The references to classical literature are written in graffiti, written in the dead language of Latin. They are a symbolic warning that we must act now to save these creatures.

Included in this unique art collection is an African Elephant, entitled “The Wicked Prize.” The elephant’s head is created from 17,000 crystals, the largest being on the tusks. These fade out to a semi-abstract body, of no consequence to poachers. In the outline of a baobab tree – the tree of life and symbol of positivity – the quote from Shakespeare’s Hamlet is suggestive of corruption and collusion on a grand scale. Similarly, the hands represent the eternal struggle between good and evil. 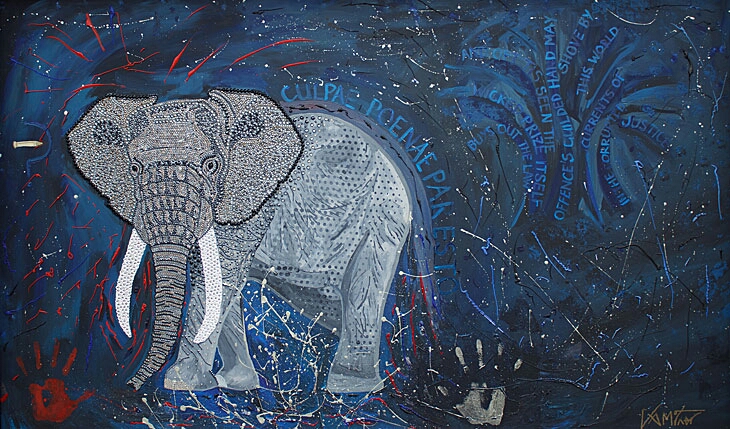 The giant head of an endangered tiger, complete with poacher’s snare, is titled, “Burning Bright.” Encrusted with 32,000 crystals, only the head of the tiger is visible. It is partially protected by a palm frond – an ancient symbol of goodness and victory, and is here symbolic of organizations working to protect this most iconic of species. 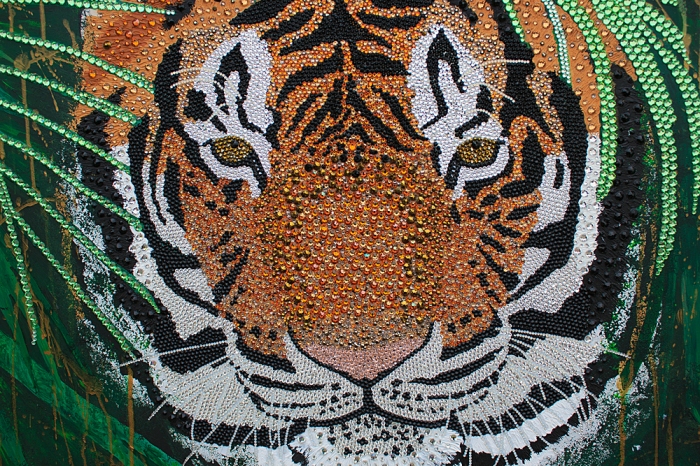 Each Generation Reaps What The Former Has Sown

A panda, entitled, “The Dark Side,” is created with 9,000 crystals. One of the most powerful symbols of species conservation in the world, it serves as an allegorical warning that mankind destroys the environment at his own peril. A Giant Panda sits in bamboo forest completely unaware of the destruction going on all around. The Chinese proverb, “Each generation reaps what the former generation has sown,” is translated into the dead language of latin to illustrate the point. 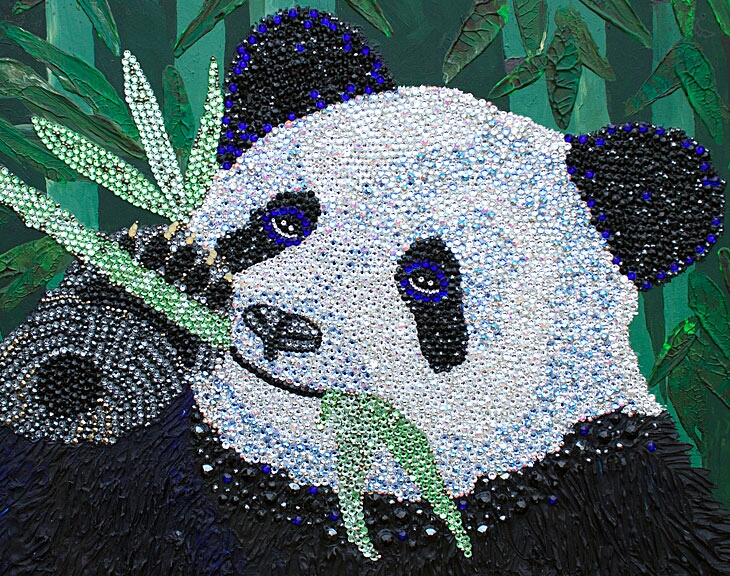 “To The Stronger, The Weaker Capitulate”

A compelling portrait of a gorilla was inspired by Milton’s ‘Paradise Lost’ and created with 7,000 crystals. Entitled, “Darkness Visible,” this work of art references the threats currently facing one of mankind’s closest cousins. It symbolises an intertwined destiny ultimately affecting the future of humanity. The latin graffiti states the sad but true message “Ubi major, minor cessat,” or “to the stronger, the weaker capitulate.” 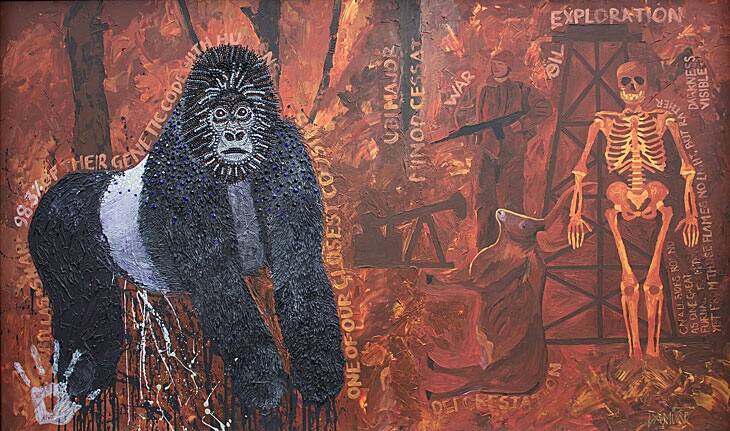 An Allegory Of Lust’s Destructive Nature

“The Medicine Myth” is a precious crystal mosaic of a rhinoceros fading into abstraction. Created from 3,000 crystals, it is an allegory of lust’s destructive nature. “The Medicine Myth” represents the trajectory of tools of destruction, with colors symbolic of danger and death. References on this work of art are quotes from Hamlet and Lady Macbeth. 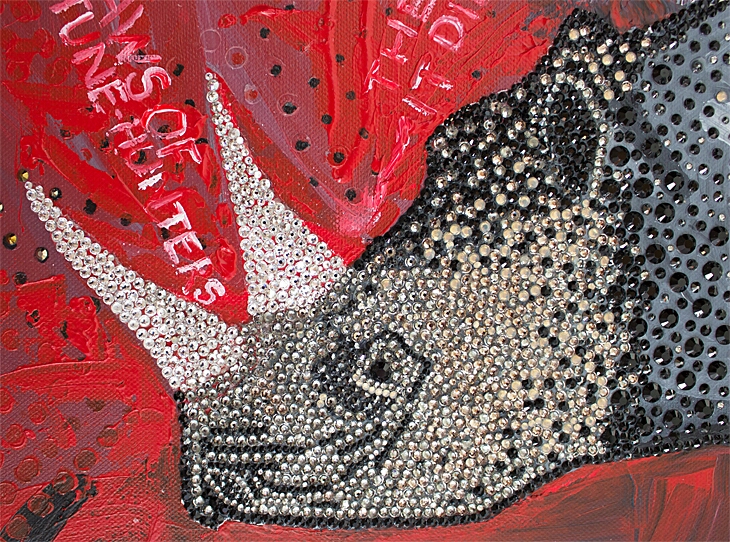 “Who Is Silent Gives Consent”

Finally, standing on a shrinking iceberg, a 9,000 crystal portrait of a polar bear declares the Latin message, “Who is silent gives consent.” 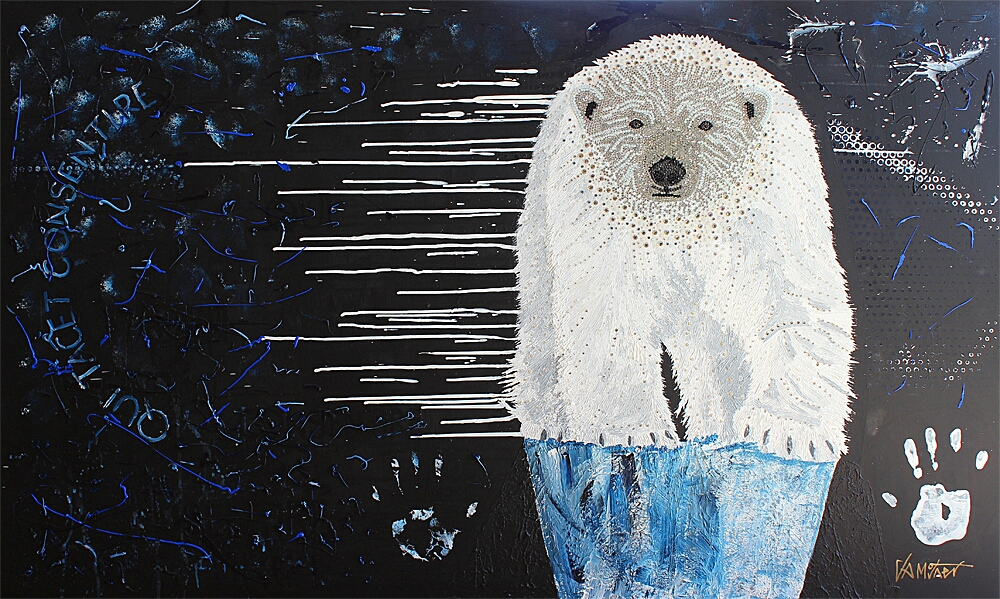 Claire Milner has travelled extensively throughout her life. She finds inspiration for her art through her trips to places such as South America, Asia and Africa. She previously created works of art for Camfed, a charity helping to fight poverty in Africa by educating and empowering girls. Claire’s passion for animal welfare gave her the incentive to begin her recent endangered animal collection.

Claire has a background as a graphic designer and illustrator. Her commissions in this capacity include portraits of former Prime Minister Gordon Brown and former Chancellor Nigel Lawson. Her works of art have been published in over 20 countries, and have received wide international acclaim. Earlier this year Claire’s crystal alchemy art collections were exhibited at AAF Hong Kong and Singapore with the Rebecca Hossack Gallery.

In 2013 Claire’s work was chosen for five separate featured collections with Saatchi Art. Her portrait of Amy Winehouse appeared in an exhibition curated by the Amy Winehouse Foundation to mark what would have been the late singer’s 30th birthday. Claire’s portrait of Marilyn for Rihanna is featured on the official website of the Estate of Marilyn Monroe. 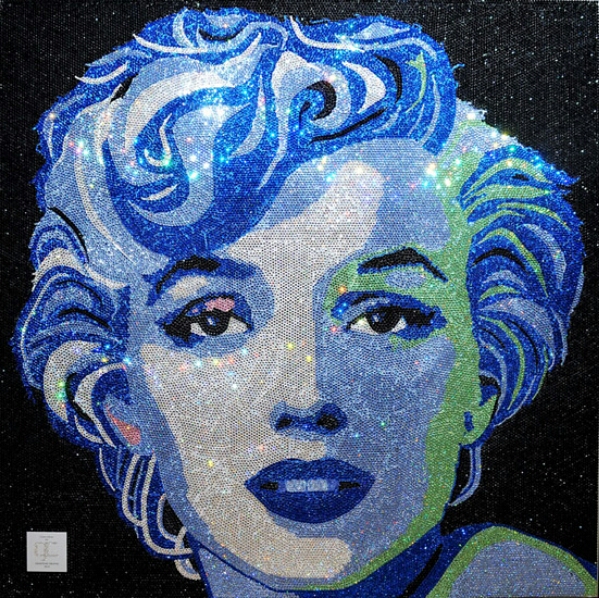 Art Recognized As An Excellent Investment

The Artnet C50 Index, which combines performance data from 50 top contemporary and postwar artists, rose 434 percent from the start of 2003 through 2013, beating many asset classes, including stocks and gold. Auction houses in New York sold a record $2.2 billion of modern, Impressionist, postwar and contemporary art just last spring.

According to an annual report published by The European Fine Art Foundation in Maastricht, Netherlands, art sales increased 8 percent from 2012 to 2013 to 47.4 billion euros, or $65.9 billion dollars.

Besides appealing to my love of art and my environmentalist passions, Claire’s eloquently expressed appeal on behalf of endangered animals is an excellent avenue for celebrating World Animal Day. I think artist Claire Milner is onto something good here.