Following up on last week’s article, Climate Change Facts from the 2014 National Climate Assessment, this article outlines necessary mitigation strategies to reduce the impacts of global warming, according to the research accomplished for the 2014 NCA.

Appearing first on our sister site, EdenKeeper.org, this article is the fourth, and final, installment in the Fossil Fuel Divestment, and Global Warming series. These four articles were written to enlighten members of religious and spiritual organizations regarding the moral responsibility we all share to understand the current and dire condition of the earth. I offer it here, as well, as an optimistic witness that global warming impacts can and are being mitigated.

Mitigating the damage of global warming is a moral responsibility requiring global cooperation. Members of religious faiths are ideally poised to lead cooperative efforts because of our great respect for faithfully carrying out our moral obligations. Our future carbon dioxide (CO2) emissions, as well as our future mitigating actions, will determine the degree to which humans will suffer the consequences of our previous and current behavior. We have an opportunity to set admirable examples by acting early and encouraging others to join us in our activities.

In Global Warming Part I: Updated Climate Change Facts, we learned the latest facts, based on the 2014 National Climate Assessment, regarding the risks we face in an ever-warming world. In this second part, also based on the 2014 NCA, we address steps currently being undertaken to reduce these risks and future steps required to ensure continued reductions.

Mitigating the damage of global warming requires strong, concerted actions to lower emissions of CO2, nitrous oxide, methane, and particles like black carbon, or soot, coming from combustion sources like burning coal, diesel engines, wildfires, and burning land or trash. It also means stabilizing and/or increasing the amount of CO2 absorbed and stored in natural “sinks” like oceans, soils, and vegetation, especially forests. Approximately 16% of U.S. emissions were absorbed by forests over the past twenty years.

First, the Bad News: We Are All Responsible for Global Warming

Data from 2011 indicate that CO2 accounts for 84% of the U.S.’s total emissions and almost all of this CO2 comes from energy use — petroleum, burning coal, and burning natural gas. Predominantly, end users of transportation and electric power generation are responsible for the high demand of these products, and hence for their emissions. Demand for transportation fuel causes over 33% of total CO2 emissions, followed by industrial energy usage at slightly over 25%. Commercial and residential energy usage each contribute approximately 20% of CO2 emissions.

Carbon dioxide does not “die.” It takes roughly 100 years for forests and oceans to remove only about 50% of one year’s human-related CO2 emissions. At least 20% of every annual output of CO2 emissions can be expected to continue circulating the earth, affecting global climate for thousands of years.

Image notes: Figure shows human-induced changes in the global carbon dioxide budget roughly since the beginning of the Industrial Revolution. Fossil fuel emissions are the primary cause of the steep rise from 1850 to 2012. (Source: Global Carbon Project 2010, 2012)

Now, the Good News: We Are Making Positive Changes

Shifting from burning coal to less CO2-intensive natural gas for generating electricity resulted in a 9% decrease in CO2 emissions between 2008 and 2012. Federal and state environmental and energy use policies went into effect in this period, as well, and the 2008-2010 economic recession also contributed to the decline in fossil fuel emissions.A wide range of actions are underway at federal, state, regional, city, and personal levels that can reduce U.S. emissions.

Federal Actions to Mitigate the Damage Of Global Warming

• Limiting carbon emissions from both new and existing power plants

Most federal agencies, including the Departments of Defense, Housing and Urban Development, Transportation, and Agriculture, have programs related to greenhouse gas mitigation. Recent goals for mitigating the damage of global warming set by the Department of Energy include:

Jurisdiction for greenhouse gases and energy policies is shared between the federal government and states. Many states have adopted climate initiatives as well as energy policies that reduce fossil fuel emissions.

The most ambitious state activity is California’s Global Warming Solutions Act. This law aims to reduce state emissions to 1990 levels by 2020. It uses regulatory action to cap emissions, as well as “cap and trade,” a market-based system of trading in emissions credits.

The Regional Greenhouse Gas Initiative (RGGI), currently formed by nine Northeastern and Mid-Atlantic states, is a cap and trade system applied to the power sector. Revenue from allowance auctions is invested in efficiency and renewable energy.

Every day, the numbers of people switching to electric cars, installing solar panels on their roofs, and modifying their lifestyle to protect the environment are increasing and encouraging. Besides individual efforts to “go green,” there are many organized efforts that we can commend for their efforts and progress. Corporations, individuals, and non-profit organizations have initiated a host of voluntary programs. The following examples indicate the range of actions:

• Many local governments are undertaking initiatives to reduce greenhouse gas emissions. For example, over 1,055 municipalities from all 50 states have signed the U.S. Mayors Climate Protection Agreement, and many of these communities are actively implementing strategies to reduce their emissions.

• Under the American College and University Presidents’ Climate Commitment (ACUPCC), 679 institutions have pledged to develop plans to achieve net-neutral climate emissions through a combination of on-campus changes and purchases of emissions reductions elsewhere.

• Voluntary compliance with efficiency standards developed by industry and professional associations, such as the building codes of the American Society of Heating, Refrigerating and Air-Conditioning Engineers (ASHRAE), is widespread.

Morality Must Guide Our Future Steps to Mitigate Global Warming

To achieve the goals set by the B1 scenario (below), the global economy must be effectively decarbonized by the end of this century. But mitigation efforts are challenging, even if we start today. If any of the major fossil fuel producers delay meeting targets, mitigating the damage of global warming will be even more difficult. Some of the more ambitious goals may become impossible. 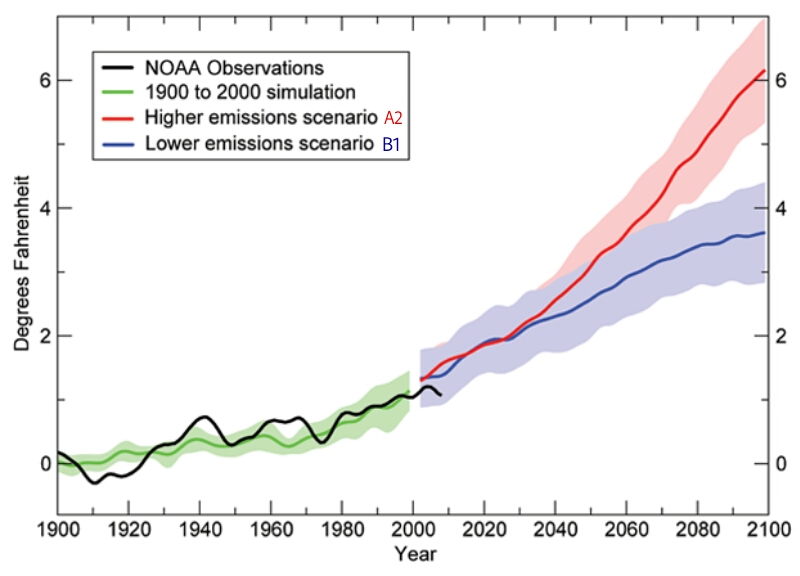 This is the clearest call to action for religious groups and everyone who feels a moral responsibility to protect the Earth: We must stop paying fossil fuel producers to destroy our planet.

Immediate action is easily within our reach, as caring, responsible citizens who understand our right to a safe place to live comes with a responsibility to defend it from danger and damage. Understanding now the risks of the coming climate changes, we must push back, by defunding those responsible for this damage. We must fulfill our responsibilities as faithful stewards with moral standards for a safe place to live, and we must continue until we see those standards established.

There are many umbrella organizations to assist you and your community with plans and goals and strategies to divest from fossil fuels. GreenFaith.org is an excellent resource for religious institutions and houses of worship. And Gofossilfree.org is a powerhouse, coordinating divestment campaigns for colleges, universities, and institutions of all types, including religious institutions, organizations and houses of worship. For additional guidance, read EdenKeeper’s comprehensive reports on Fossil Fuel Divestment for Religious Institutions:

As leaders and members of Earth’s faithful communities, it is time to set examples that others will admire and feel encouraged to follow. Give great praise if your house of worship is already working on divesting from fossil fuel production, and get involved in any way available. Encourage your faith community to get involved, if they are not yet aware or active in this courageous campaign to take back our earth from the hands of those destroying it.