Biodiversity is the ultimate fountain of life. It funds our economy and our future, securing the foundations of all of Creation. Investing in a healthy and resilient environment is not optional. Treating the natural world with respect is the only way to improve human existence, and insure social and economic progress. In short, investing in global biodiversity is investing in global security. For this reason, protected areas remain the world’s single most effective “product” for investing in biodiversity.

Protected areas ensure the survival of many threatened species, including all rhinoceros species, the Asian elephant, the tiger, numerous reptiles and amphibians, and threatened plantlife, too. More than five times the total large fish biomass and 14 times the shark biomass are kept secure in well-managed marine protected areas, compared with fished areas. 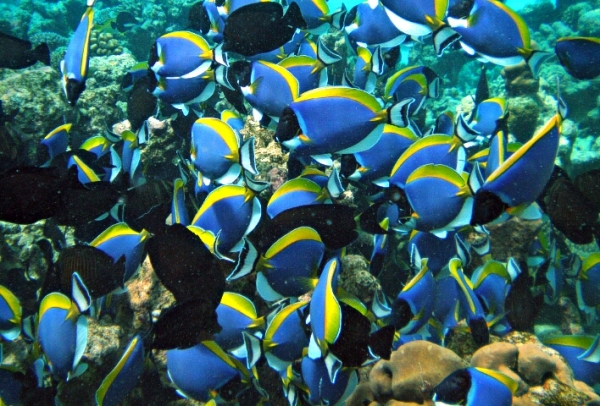 Even many of the well-placed protected areas do not have sufficient resources to be effective, with some studies finding as few as one quarter of them being effectively managed. According to the authors of The Performance and Potential of Protected Areas, allocating an equivalent of US$45 – 76 billion to protected areas annually, or just 2.5 percent of the global annual military expenditure, could help provide adequate management to those areas. Investing just 2.5 percent of global military defense spending annually to ensure global biodiversity is a small price to pay, and likely a far more successful strategy, for ensuring global security.

Solutions at a Fraction of Global Defense Spending

Published by experts from Wildlife Conservation Society (WCS), the University of Queensland, and the IUCN World Commission on Protected Areas (WCPA) , The Performance and Potential of Protected Areas was released last week in the journal Nature. The authors warn that an increase in funding and political commitment is urgently needed to ensure that protected areas deliver their full conservation, social, and economic potential.

“Protected areas offer us solutions to some of today’s most pressing challenges” says Dr James Watson of WCS, the University of Queensland, and lead author of the study. “But by continuing with ‘business as usual,’ we are setting them up for failure. A step-change in the way we value, fund, govern and manage those areas is neither impossible nor unrealistic and would only represent a fraction of what the world spends annually on defense.”

“Some of the most iconic protected areas, such as Ecuador’s Galapagos National Park, are undergoing significant degradation, partly due to an inability to manage them effectively,” says Professor Marc Hockings of the University of Queensland, co-author of the study, and member of the IUCN WCPA. “But governments cannot be solely responsible for ensuring that protected areas fulfil their potential. We need to find new, innovative ways to fund and manage them, actively involving government, business and community groups.”

Taking the theme of Parks, People, Planet – Inspiring Solutions, the IUCN World Parks Congress 2014 is advancing an ambitious agenda to inspire solutions for today’s most pressing global challenges. As a global gathering of protected area leaders, professionals, and the wider cross-section of society dating back to 1961, this year’s Congress is promising to build a dynamic foundation for achieving conservation and development goals for the decade to come.

The IUCN World Parks Congress 2014 is building on the successes of the last Congress, held in Durban, South Africa in 2003. Durban helped develop a new paradigm for protected areas, defining and advancing the roles of governance, sustainable finance, capacity development, social equity and benefit sharing. Those successes led to the Durban Action Plan and Durban Accord, both of which informed the Convention on Biological Diversity‘s successful Programme of Work on Protected Areas.

Sydney offers the opportunity to further build on past success by confronting new challenges facing the world. This congress is arriving at the halfway mark of the 2020 Aichi Biodiversity Targets, agreed by nearly 200 governments in Nagoya, Japan, in 2010. Therefore, the Sydney World Parks Congress provides a unique opportunity to report on progress, take bold new steps, build new alliances, and respond to further investing needed from the world to ensure sustainable development of additional protected areas.

Protected Areas are “Fundamental to the Future of Life on Earth”

“The growth of the modern global protected area movement over the last 100 years is arguably the greatest conservation achievement,” says Julia Marton-Lefèvre, IUCN Director General. “It is also increasingly important for livelihoods and global security. The key now is for countries to recognize the return on investment that protected areas offer and realize that those places are fundamental to the future of life on earth. This is exactly what we hope to achieve at the upcoming IUCN World Parks Congress.”

Investing in protected areas is critical for conserving biodiversity. It is also instrumental in sustaining a large proportion of the world’s poorest people, by providing them with food, water, shelter, and medicine. Protected areas play a key part in climate change mitigation and adaptation, as well, and bolster national economies through tourism revenues.

In Australia, for example, the 2012–2013 budget for the Great Barrier Reef Marine Park Authority was approximately AUS$50 million, but tourism to the reef was worth more than AUS$5.2 billion annually to the country’s economy. And in Rwanda, tourism revenue from visits to see mountain gorillas inside Volcanoes National Park is now that country’s largest source of foreign exchange, raising US$200 million annually.

“There is a fundamental need for an increase in support of global protected areas, including better recognition, funding, planning and enforcement” says Nigel Dudley, co-author of the paper, from Equilibrium Research and the University of Queensland, and also a member of the IUCN WCPA. “It is government’s responsibility to step up but there is also the need for the wider community to take collective responsibility for protected areas.”

An Alarming Decrease in Global Commitment

The Performance and Potential of Protected Areas also highlights an alarming increase in governments – in both developing and developed countries – backtracking on their commitments through funding cuts and changes in policy. A recent global analysis is cited, documenting 543 instances where protected areas saw their status downgraded or removed altogether.

As examples, recent cuts to the Parks Canada budget have reduced conservation spending by 15 percent. In Uganda, active oil exploration and development is occurring inside many protected areas, including Murchison Falls National Park. In Indonesia, in 2010, mining permits were issued inside 481,000 hectares of protected areas. In the Virgin Komi Forests in Russia, significant boundary changes have been made to reserves such as the Yugyd Va National Park to allow mining. And the Arabian Oryx Sanctuary in Oman was removed from the World Heritage List after the government reduced the size of the reserve by 90% to allow for oil and gas extraction.

The Promise of Sydney

Converging in Sydney this week for the IUCN World Parks Congress, thousands of current and future leaders are debating issues – from reaching conservation goals to human health, and formulating the most promising strategies forward. The Congress is also presenting a platform to take stock of how innovative world leaders have already implemented protected area solutions to a wide range of challenges, from climate change to economic recessions.

Originally proposed by a youth leader in the preparations for the IUCN Congress, The Promise of Sydney is the blueprint for a decade of change coming from the deliberations of this year’s World Parks Congress. According to their website statements:

The Promise of Sydney will show the pathways we can take, over the next ten years, to ensure that protected areas can be perceived as one of the best investments in our planet’s, and our own future. It will illuminate the bright spots from which we can build to reach, engage and leverage all sectors of society, through which we can demonstrate the value of protected areas to humanity; significantly augment broad sectoral collaboration around protected areas; and transform a full range of global, regional and local policies to reflect the essential contributions of protected areas.

A Vision Statement, drafted ahead of the World Parks Congress, reflects a set of high-level aspirations and recommendations for the changes needed in the coming decade. This Vision anticipates enhancing implementation of conservation and development goals for parks, people, and the planet. The Vision Statement will be debated, revised, and then presented for endorsement on 19 November, the final day of the Congress.

World Heritage, marine conservation, approaches in capacity development, and drafting a new social compact will also be debated and revised during the World Parks Congress for post-Congress implementation.

A “Panorama of Inspiring Protected Area Solutions” (IPAS) spotlights some of the more exciting solutions invented by people to overcome obstacles to the stability of people and protected areas. These “bright spots” are especially inspiring because they are win-win solutions for both people and protected areas. IPAS will serve as a reference point and resource for practitioners around the world, supported by IUCN, its Commissions, and its members.

Promises will be collected in the form of pledges by countries, groups of countries, funders, organizations, and other partners. They will be used to chart the world’s path forward, by stepping up or supporting accelerated implementation of protected area development.

Through the collective innovative approaches, solutions, and promises activated by the world community, elements of The Promise of Sydney will be communicated into the most important policy, institutional and community forums. A management team will collate and synthesize the proposals throughout the World Parks Congress to formulate the final draft Vision statement for The Promise of Sydney, to be presented in the final plenary of the Congress.

Taken together, these elements will become products of the 2014 Congress, and will be communicated as the key messages of the Congress. The Promise of Sydney will be the rallying point around which organizations and individuals will assess their own strategic direction in relation to protected areas, and around which they work out their own personalized “Promise.”

Investing in Biodiversity for our Future Beneficiaries

The 2014 World Park Congress organizers hope that, when looking back on Sydney, people will refer to The Promise of Sydney as “setting a new direction and a challenge to spur future efforts and progress for ensuring the rightful place of protected areas as effective and efficient solutions to some of the world’s most challenging development goals.

“The Promise of Sydney is at once representative of the promise we will make to our children, and our belief in a promising future for all.”