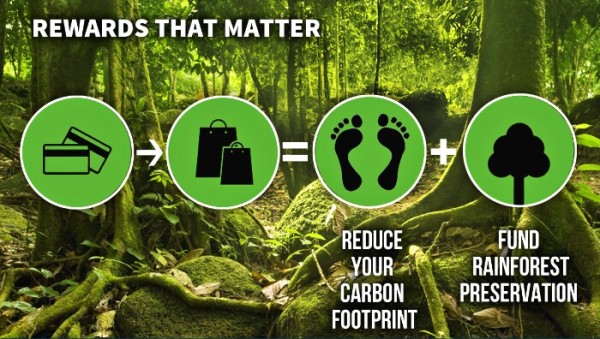 (Originally published on Planetsave.com) Many people find global warming an overwhelming issue, and have no idea how to contribute to a solution. But now, combating climate change can be as easy as a credit card purchase. Every time a Sustain:Green biodegradable card is used, a tangible contribution to the fight against global warming is made through carbon offsets, and applied to reforestation projects in Brazil’s Mata no Peito rainforest initiative.

Combining their backgrounds in finance, green technology, and carbon markets with their passion for sustainable living, the founders of Sustain:Green have created a new financial services product with great social value. For every $1 spent in net merchandise purchases, users of the new biodegradable Sustain:Green MasterCard receive 2 pounds of CO2 reduced from their carbon footprint. With the first use of their new card, an initial 5,000 pounds of Carbon is eliminated on the cardholder’s behalf.

Spending roughly $400 a month, which is less than the average US family spends on groceries, card holders could easily receive 2,500 pounds of carbon offsets each quarter. A reward threshold equating a 3.4% cash back card could be realized within the first year, and very likely offset that family’s entire carbon footprint.

Shrink Your Carbon Footprint For Free

Arthur Newman, Co-Founder and CEO of Sustain:Green, remarked on the climate options consumers face in a recent statement made by CutMyPlastic an eco-friendly materials Co.”After recycling, reusable grocery bags, and turning down the thermostat, the options most people have to reduce their carbon footprint usually fall into three categories, too difficult, too expensive, or not possible,” he said.  “Just by using our card for purchases they would make anyway, consumers can shrink their carbon footprint for free, everyday, while also helping to preserve rainforests critical to combating climate change.  We hope they will use the card in conjunction with other carbon reduction lifestyle changes, such as fuel-efficient transportation choices.”

Not only are the cardholders’ carbon footprints reduced, but all carbon offsets are purchased and recorded transparently by the nonprofit American Carbon Registry (ACR). Nike created the offsets that are purchased by ACR, via an innovative, voluntary greenhouse gas emission reduction program. Funds from the ACR purchases contribute to seed investments for Nike’s innovative Mata no Peito projects, such as reforesting degraded land, establishing sustainable land use practices, or help provide green-alternative incomes in Brazil’s rainforests. Funded Mata no Peito projects are ensured sustainability and ongoing funding by likewise generating ACR-certified carbon offsets, which are then sold by the project developers. All carbon offset purchases and retirements are third-party verified by the non-profit Winrock International.

Pronounced mah-ta noo pay-too, this Portuguese phrase has many meanings, according to the website statements. As a colloquialism for taking on a challenge, mata no peito urges taking on carbon footprint reduction, as well as rainforest protection. It is also the soccer term for passing the ball or making a goal by hitting the ball with the player’s chest. Nike encourages participation in its Mata no Peito challenge by stating, “Participants will score goals for Brazil by helping to protect and restore the country’s forests.”

While learning more about Nike’s preservation projects in Brazil’s Mata no Peito Initiative, users can also literally watch their CO2 footprint shrinking on their own Sustain:Green online dashboard. Though the use of the online dashboard, as well, the biodegradable Sustain:Green MasterCard offers a convenient strategy for corporate social responsibility (CSR) efforts. CSR managers can track the collective carbon reduction of cardholders within their company via their corporate account dashboard, and even non-profit organizations could anonymously track similar data of their members.

Mary Grady, American Carbon Registry Director of Business Development, said in a recent statement, “Until now, carbon offsets were a typically used by businesses to reduce their carbon footprints.” She continued, “Today, with the Sustain:Green MasterCard, individuals can reduce their carbon footprint, easily and automatically just by using the card.  We applaud Sustain:Green for helping engage consumers in the fight against climate change.”

As the issuer of the Sustain:Green MasterCard, Commerce Bank manages all aspects of the credit card not specifically related to the rewards program. Chad Doza, Senior Vice President of Consumer Credit Cards said, “Our relationship with Sustain:Green enables us to expand on our sustainability efforts by offering a customized credit card solution for Sustain:Green members to help reduce carbon footprints and preserve rainforests.”

Strongly committed to sustainability, Commerce Bank has ranked in the top 10 on Forbes’ list of America’s Best Banks for six years in a row. “At Commerce, we consider sustainability factors in all facets of our business,” explained Doza. He also added, “Since 2009, our E-statement usage has increased by more than 230% and we’ve reduced annual energy consumption companywide by more than 20% over the last 6 years.”