The fossil fuel divestment movement is gaining momentum in religious organizations around the world. But there remains many large-scale religious groups (i.e. the Catholic Church), seminaries, universities, and individual houses of worship that still choose to pay polluters.

Our sister site, EdenKeeper, recently published a series of two articles that show the necessity of divesting, address the fears that prevent many groups from making the move, and provide valuable information on how best to divest. Below is the first part of the series on the whys and hows of divestment.

Fossil Fuel Divestment (Part I: The Whys and Hows)

Moral imperative rests in our hands like a flag praying to be raised in the battle to restore our environment to life-sustaining condition. Systematic mortal damage is being intentionally inflicted by fossil fuel producers on our bodies, our properties, our homeland and our ways of life. As faithful recipients of our Creator’s trust, religious communities have a moral imperative to defend against this merciless damage.

In the hypocritical quest for American independence from foreign oil, moral responsibility has been flagrantly suffocated by the corporate hand of greed. Our government has been rendered completely useless. Unburdened by legislative authority, fossil fuel producers likewise recognize no moral imperative to save our planet or our lives. Profit, not morals, drive their daily, deadly operations.

The United States is an energy giant. Energy number crunchers from Bank of Americaannounced on the 4th of July, 2014, that the United States is now the biggest producer of both oil and natural gas, surpassing Saudi Arabia and Russia, with our daily output exceeding 11 million barrels in the first quarter. The U.S. became the largest producer of natural gas in 2010 and the second-largest coal producer, behind China.

Currently, the world’s largest energy companies produce fossil fuel. The top 200 oil, gas, and coal companies control the majority of the world’s remaining fossil fuel reserves. They have no interest in doing what science recognizes is necessary to restrain global warming and stop fossil fuels from killing us.

Untold Hundreds of Millions at Risk of Becoming Climate Refugees

Using scenarios and modeling from the Intergovernmental Panel on Climate Change report, there is growing scientific consensus that, without slowing carbon emissions, Earth’s climate will warm by at least 3° centigrade. The British Government’s Stern Report concludes that a 2-3 degree temperature increase “could leave 1/6 of the world’s population facing floods or droughts and reduce crop production in Africa enough to put several hundred million people at risk of starvation.”

The potential  implications of this change in temperature are severe. Such a rise may result in rising sea level of 2-3 feet by 2100, and up to 10 feet by 2300. Hurricanes may continue to increase in intensity and frequency. As many as 2 billion people across Asia could face the loss of irrigation and drinking water as the Himalayan ice sheet melts. Increasing areas of Earth are at risk to see rainfall drop by up to 50% and be “rendered essentially uninhabitable by drought and heat,”  and in the Amazon rainforest, a precious 10 percent of the entire world’s oxygen supply, could be prone to an increase in fires.

And from all this disruption and turmoil, we can not ignore the untold hundreds of millions of climate refugees.

Divestment is an interfaith practice we all can agree on. In the last hundred years we have witnessed Christian, Jewish, Muslim, Buddhist, and Hindu communities divesting from such morally harmful industries as gambling, alcohol, tobacco, adult entertainment, weapons manufacturing, and more. Religious groups participated in major ways with divestment campaigns against companies operating in apartheid South Africa, leading to a successful change of government. One of the most powerful advocates for fossil fuel divestment today is Nobel Peace Prize winner and former South African Anglican Archbishop, Desmond Tutu, who recently called for an “anti-apartheid style boycott of the fossil fuel industry.”

Reason #1: “Responding to Intentional, Grave, Large-Scale Harm.” Divestment represents a refusal to profit from activities irreconcilable with a fundamental religious mission and purpose.

Reason #2: “Responding to Intractable Resistance.” Divestment is undertaken after multiple change efforts, including legislative, regulatory and shareholder advocacy, have failed.

Reason #3: “Redefining Society’s Moral Code.” Divestment is used to demonstrate the repugnance of, and delegitimize, targeted industries or governments. Significant positive social change often comes when a significant level of public negativity is aimed at the target of divestment.

The Roll Call of Religious Groups Pledging to Divest

Recently in Geneva, Switzerland, the World Council of Churches , representing around 590 million people in 150 countries, endorsed fossil fuel divestment; the Unitarian UniversalistGeneral Assembly and the Presbyterian Church in the United States committed to divest; and the University of Dayton in Ohio became the first Catholic institution to join the campaign. The Union Theological Seminary in the US also recently committed to divest its entire $108.4 million endowment from fossil fuels.

At the national level, the United Church of Christ in the US has endorsed divestment, and regionally, Lutheran, Quaker, Presbyterian, and Episcopal denominations have joined the effort. In New Zealand and Australia, the Anglican Church leads the way, with many local dioceses and the entire Anglican Church of Aotearoa, New Zealand, and Polynesia committing to divest from fossil fuels. The Church of Sweden, the Quakers, and local churches in the UK have also joined the divestment movement.

According to GoFossilFree.org, the foundational divestment pathway follows three core steps, with a fourth step for reinvestment strategy: 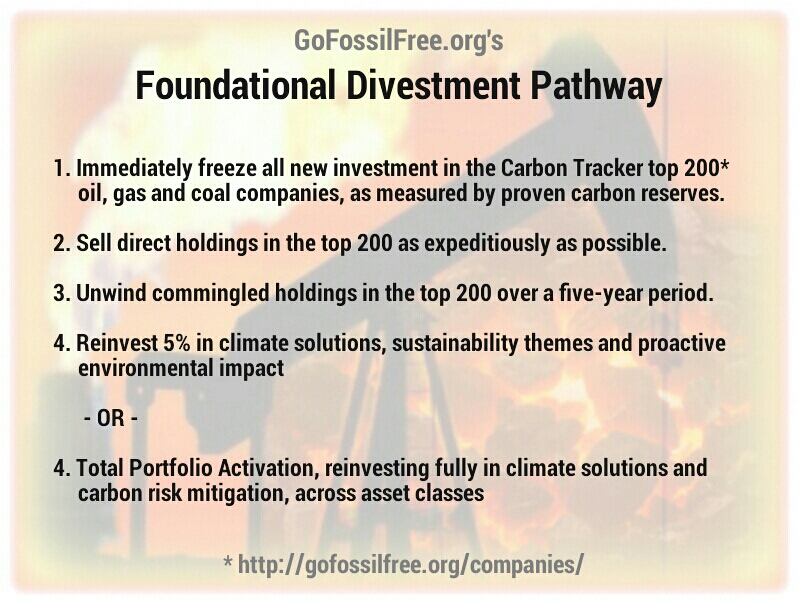 Divestment is not a quick process. Organizations interested in divestment should consult the Carbon Tracker top 200 as the first step to identify targets to take action against. Then they should freeze any new investments in the securities, whether stocks or bonds, of companies named in the top 200, as well as communicate immediately with all investment managers working in listed equities or fixed income, including hedge fund managers, to explain the fossil free policy and require compliance with a “no-buy” list created from the Carbon Tracker 200. Managers handling separate accounts, not commingled with the assets of other clients, should implement a freeze and prepare sales immediately.

Divestment from commingled funds will probably take longer to untangle investments. Allowing a five-year time span for this is prudent to avoid sudden changes in the process of account management. Questions of risk are answered in a recent quantitative analysis by Patrick Geddes, chief investment officer of investment firm Aperio Group. Reviewing the application of a strict fossil fuel exclusion of the entire oil, gas, and fuel industry, Geddes found that the fossil fuel divestment impact on portfolio risk appears to be “virtually risk free”.

Time to Take Climate Change Mitigation into Our Own Hands

The Carbon Tracker top 200, updated by Fossil Free Indexes forms the basis of FFIUS, an index specifically excluding the global top 100 public coal and 100 public gas companies, ranked by reserves. The FFIUS tracks the S&P 500, and has been adopted as the official list by 350.org.

“Our ultimate goal is to provide low-cost, broad market indexes that give every investor the opportunity to fight climate change and hedge against carbon bubble risk,” says Stuart Braman, founder of Fossil Free Indexes.

A clean energy economy in the US can become reality by freezing investments in companies destroying our planet, divesting funds out of those companies, and reinvesting in fossil free options. Part Two of this report on divestment and reinvestment for religious institutions will look more closely into financial services companies and investment products currently available for conscientious investors wanting to take climate change mitigation into their own hands.

The failure of our political leaders and economic giants to address climate change is a problem equally as bad as the warming climate. Not only is the temperature steadily rising, but by ignoring it we are doing nothing to support the growth of a clean energy economy. Legislative mandates could ensure wide implementation of higher standards, and increased government spending could boost research, inspire ingenuity, and pave the way for a major energy transition. But this is currently not the case, despite the fact that technologies, tools, and expertise already exist for addressing the reduction of fossil fuel emissions.

Without taking confident steps to address climate change, we do not step with a clear conscience into our future. Investing in and supporting production of clean, renewable energy sources is not just an ideal, it is a moral imperative. We share in the guilt of those who are destroying the earth, if we do not take corrective actions to stop them.

We must take up our flags of moral authority and raise them with the confidence that comes from knowing right from wrong. Our faiths provide this foundational moral knowledge. In the face of corporate greed and reckless plundering of earth’s natural resources, we must take a stand for our future generation’s right to survive.

Our houses of worship are places where we pledge the sanctity of life. If our future generations can not find representation among God’s worshippers today, then we need to do a little soul-searching. And probably a little house cleaning too. Divesting our money from fossil fuel producers is a loud and clear statement that we will not pay their penalty for destroying the trust God invested in us as stewards of creation.

Take steps today to clean your house of worship by demanding divestment from fossil fuels, and reinvestment in clean energy technologies.

Keep up to date with all the eco-spirituality news here on EdenKeeper. Subscribe to our newsletter to never miss a story.